This story was originally published on UGA Today on May 11, 2021.

“My fellow board members and I are delighted to play a role in this transformation at the University of Georgia,” said Sachin Shailendra, chair of the Board of Regents of the University System of Georgia. “And my very good friend, Jere Morehead, has always remained dedicated to students and the state of Georgia. There is no one more deserving of this honor.”

“President Morehead is a gifted leader with an unyielding dedication to student learning and success,” said Steve W. Wrigley, chancellor of the University System of Georgia. “Nowhere is that more evident than his impact on the Honors Program, which—under his direction—rose from a solid foundation to a position of great national distinction.”

The fundraising campaign, which has raised more than $8 million of its $10 million goal, will elevate the Honors Program into an Honors College by creating an endowment that will provide new, permanent and robust support for academic programming, undergraduate research, study abroad and internship opportunities for Honors students.

“Upon learning of this action, it is difficult for me to adequately express my appreciation to the UGA Foundation Trustees, other donors, the chancellor and the Board of Regents for making this incredible honor possible,” said Morehead. “Working with the Honors Program—as its director and continuing as provost and president—has been one of the most rewarding and meaningful experiences of my career. I am humbled and deeply grateful.”

Current donors to the campaign include a number of UGA Foundation trustees and emeriti trustees, with whom the idea to name the college for Morehead originated.

“Naming the Honors College for President Morehead is a perfect fit and so very deserved,” said Neal Quirk, executive vice chairman of the UGA Foundation Board of Trustees. “His tenure for several years as director of the Honors Program laid an excellent foundation for tremendous success and what I feel confident will be a continued, ongoing period of unparalleled excellence.”

“I think it’s well deserved and so appropriate that President Morehead should receive this honor,” said Bonney Shuman, UGA Foundation Board of Trustees treasurer and chair of the board’s Finance Committee. “His impact on UGA extends to every corner of campus, but his history as a champion of the Honors Program is what makes this so fitting.”

Morehead served as director of the UGA Honors Program from 1999-2004. During his tenure, UGA Honors students earned 23 significant scholarships, including two Rhodes, three Marshall, three Truman and 15 Goldwater scholars. Morehead also oversaw the creation of the Washington Semester Program, through which more than 2,000 students have worked as interns in the nation’s capital. He also created the Center for Undergraduate Research Opportunities and laid the groundwork for what is now the Honors International Scholars Program. 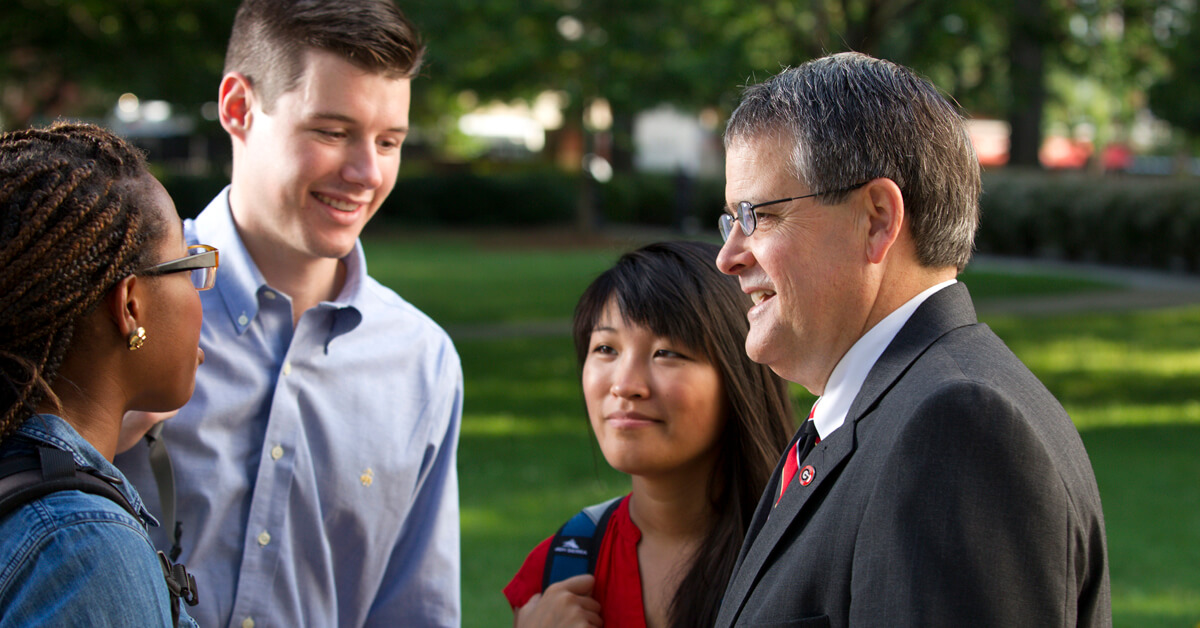 “What President Morehead did in his time as Honors Program director established a great precedent for our faculty and administration, and it built a springboard for all the students who have entered our program since,” said David S. Williams, associate provost and director of the UGA Honors Program. “UGA Honors is today regarded as one of the finest public university honors programs in the country—due in no small part to the accomplishments of the president’s tenure—so it is exciting to imagine where we go from here.”

Morehead’s UGA career began in 1986 when he joined the Terry College of Business as an assistant professor and served as advisor to the School of Law’s celebrated moot court program. Before being named UGA’s 22nd president in 2013, he served as senior vice president for academic affairs and provost for three years. Earlier, he held several key administrative posts, including vice president for instruction, vice provost for academic affairs, associate provost and director of the UGA Honors Program, and acting executive director of legal affairs.

Morehead has received several University-wide teaching honors, including the Josiah Meigs Award—UGA’s highest honor for teaching excellence. He continues to teach to this day, including a First-Year Odyssey seminar on legal issues.

“I got to know President Morehead during my time as an Honors student and a Foundation Fellow, and his commitment to elevating both the university and the Honors Program was evident to me then,” said Deep Shah, a 2008 UGA graduate and Rhodes Scholar who is currently a physician in Atlanta. “As I have come to know him more as an alumnus, that commitment has become even more clear as have the results of his efforts. I can think of no one more deserving of this honor.”

Morehead’s tenure as president has seen UGA’s four-year completion rate rise from 61% to 71% and its six-year completion rate climb to a record 87%. UGA has been rated a top 20 public university by U.S. News & World Report for five consecutive years, most recently being ranked at No. 15. He oversaw the implementation of an experiential learning requirement, making UGA the largest public university to ensure students gain hands-on experience before graduation.

Morehead also launched the New Approaches to Diversity and Inclusion Program in 2017 to identify and scale up strategies promoting the recruitment, retention and success of underrepresented students. In July 2020, he convened a Task Force on Race, Ethnicity, and Community, along with a Planning Committee on Diversity and Inclusive Excellence, to improve UGA’s learning environment and foster a more diverse and inclusive campus culture. In recognition of these and other efforts, UGA has been awarded the INSIGHT into DiversityHigher Education Excellence in Diversity Award for seven consecutive years.

Under his leadership, UGA concluded a record-breaking capital campaign in June 2020, which raised more than $1.45 billion and established more than 550 new need-based scholarships for students facing financial challenges. Earlier this spring, he was named the recipient of the Council for Advancement and Support of Education—District III’s Chief Executive Leadership Award.

In recent years, honors programs have been redesignated as named honors colleges at many institutions around the country, including Georgia State, Kennesaw State and Georgia College in the University System of Georgia. The fundraising campaign for the Morehead Honors College is expected to conclude within the calendar year, and contributions continue to be welcomed.

At UGA, Camden Dukes learned to seize opportunity, and it’s paid off
Scroll to top