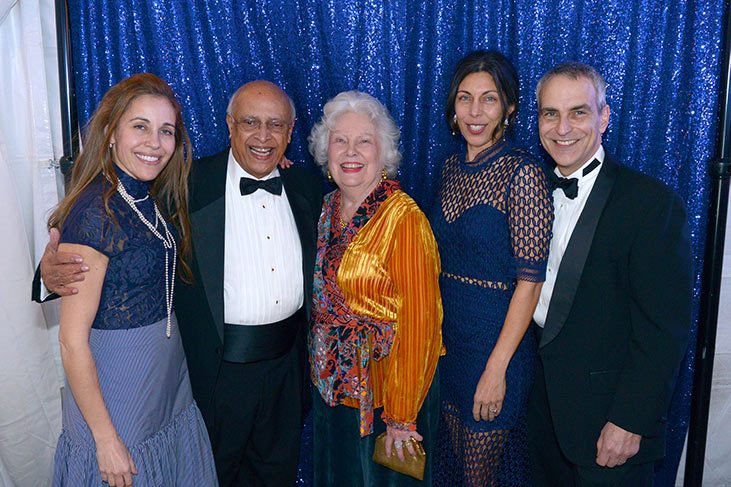 Gordhan Patel (second from left) and his family at the 16th Elegant Salute. Photo courtesy of Georgia Museum of Art.

This story was written by Hillary Brown, the director of communications for the Georgia Museum of Art, for its Summer 2019 issue of Facet. Gordhan Patel was recognized in 2013 with a Faculty Service Award from the UGA Alumni Association.

Gordhan Patel and his better half, Jinx, are so much a part of the life of the Georgia Museum of Art and the University of Georgia that one rarely wonders how they ended up here to begin with. It’s a story that starts on a banana plantation in Mozambique and ends up with Gordhan stepping in as chair of the museum’s Board of Advisors this July. Patel’s family were farmers in a small village in the region of Goa in western India, colonized by Portugal, but the rules of Indian land inheritance led his father to seek his fortune elsewhere.

Patel grew up in a large household, where he spoke Gujarati, then learned Portuguese at school. He planned to study in Switzerland, but his uncle’s wife’s brother, who had been involved in the Indian independence movement, insisted that he should learn about his own culture and talked him into attending boarding school in India. Upon arriving, he was made to put away his cotton clothing and buy homespun (or khadi). He says the rural environment and the emphasis on self-deprivation were a big change from his early years, but he made it through and went on to Wilson College, a Methodist school in Mumbai that was on the beach (no small factor in his choice!).

Visiting his parents in 1956, he was caught up in conflict between India and Portugal and couldn’t return to school. A friend had come to the Georgia Institute of Technology to get a master’s in engineering and encouraged him to try his luck in the United States. Patel applied to several schools and was planning on attending Columbia University, in New York, when he visited the same friend in St. Louis and shifted his plans to Washington University. The school had initially rejected his application due to seeing a report card full of D’s, not realizing that in India, D meant “distinction.” It was at Washington that Patel decided he no longer wanted to be a doctor, having fallen in love with both science and Jinx (herself a graduate student there).

Across the ocean, India invaded Goa, and Portugal retaliated by rounding up all Indian citizens in Mozambique, confiscating their property and placing them in detention camps. Patel’s family members were among them. Once freed, much of his family returned to Goa, but his parents remained in Mozambique.

Jinx and Gordhan married in 1964 and moved to Athens in 1967, for Gordhan to take a position at the University of Georgia. Their plan was to stay only three or four years, then move on to a different academic town, but UGA and the Athens community proved so welcoming that they’re still here, more than 50 years later. They became involved with the museum early on, due to the efforts of Mel Fuller, chair of the botany department and one of the founders of the Friends of the Georgia Museum of Art. Patel points out that Jinx majored in art as an undergraduate and served as secretary of the Friends. He says that he always visited museums, no matter where he lived, and bought the work of local artists. He says scientists often appreciate art precisely because it’s not what they focus on during their office hours.

When Portugal’s Carnation Revolution in 1974 led that country to divest itself of its colonies, the Patels were visiting Gordhan’s family in Mozambique. Several weeks of fighting ensued throughout the country, and when they returned to the United States they did so with four nieces and nephews in tow. Doubling the size of their family was challenging, but Athens has always been a great place to make a home, and they soon found jobs and places in the public schools. Patel says that at one point, he even thought about starting an Indian restaurant because his family was well known for its excellent mango pickle. Things eventually calmed down, but that ability to steer a ship through rough waters served Patel well, as department head of zoology, as dean of UGA’s Graduate School and as vice president for research. It also speaks to his ability to fill the shoes of the museum’s outgoing chair, Brenda Thompson, who has done a tremendous job during her tenure.

Patel says he believes in Thompson’s efforts to push forward a visioning plan for the museum and he hopes he can do it justice. His connections throughout the university and years of experience in many parts of it give him the ability to help tell the museum’s story as an academic institution. And, of course, his success in fundraising for this past Elegant Salute means we’ll expect big things!

Alumni turn their appreciation for the coast into an opportunity for a stud... NCR Foundation funds two STEAM scholarships
Scroll to top