Anna and Ryan Reddish attribute their success to the opportunities they received at UGA.

Anna is a veterinarian for the American Veterinary Medical Association and Ryan is a timberland acquisitions specialist for Forest Investment Associates.

“We enjoy being involved with students and helping them find their path. Watching them and their successes in school is so fun. We love getting to share those experiences with them.”

Anna and Ryan Reddish give to provide today’s Bulldogs with more opportunities to help them realize their career goals. The couple lives in Atlanta, Georgia, where Anna serves as a veterinarian for the American Veterinary Medical Association and Ryan is a timberland acquisitions specialist for Forest Investment Associates.

Anna and Ryan attribute much of their success to the experiences they had at the University of Georgia’s College of Agricultural and Environmental Sciences (CAES) and the Warnell School of Forestry and Natural Resources. “We both realize how all of the opportunities that were afforded to us at UGA have impacted us, both personally and professionally,” Anna said. “It’s a pretty easy decision to choose to give back to UGA.”

Anna grew up participating in 4-H, and maintains that it is “the greatest youth organization in the world.” Through Georgia 4-H, she learned how to care for animals and discovered a passion for her career – veterinary medicine. Now, she gives so that young people can enjoy opportunities to learn about what interests them most.

“There’s a program [in 4-H] for every kid and I hope that my gifts help youth find a program that they’re passionate about,” Anna said.

Ryan gives to Warnell’s Forestry Fund to help ease the financial burden of a college education. As someone who benefitted from a graduate assistantship while at UGA, he recognizes the tremendous impact donors make. “[My graduate assistantship] was a game-changer for me financially and helped me exit school with very minimal student debt,” Ryan said. “I want to give as many students as possible that same opportunity.”

“We both realize how all of the opportunities that were afforded to us at UGA have impacted us, both personally and professionally. It’s a pretty easy decision to choose to give back to UGA.” 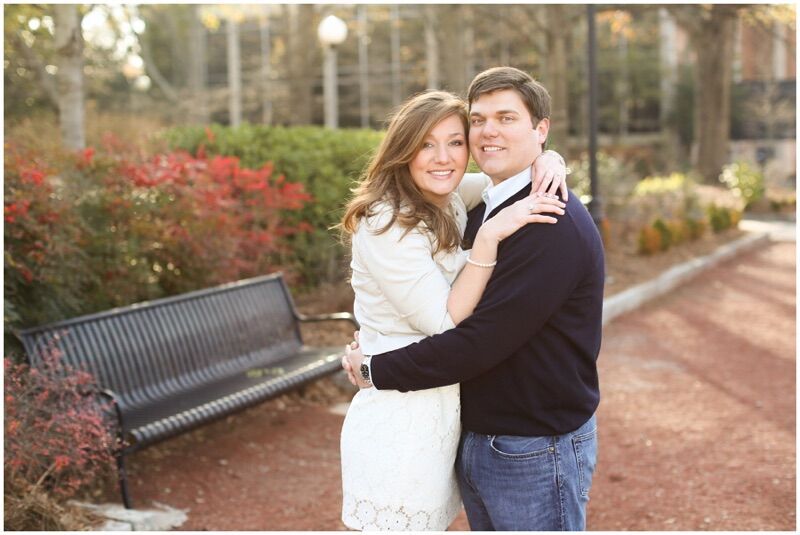 Anna and Ryan on UGA’s North Campus following their engagement. The two celebrated their marriage in 2013. 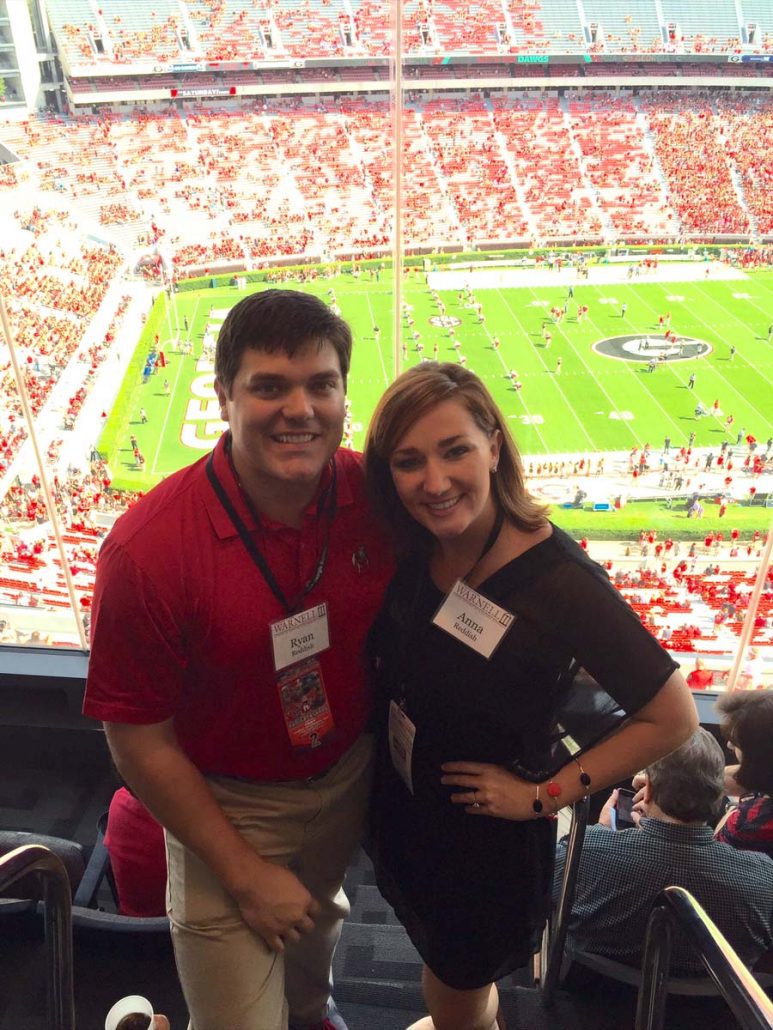 Anna and Ryan cheering on the Dawgs at Sanford Stadium.

Anna knew from a young age that she wanted to become a veterinarian. Through her work as a 4-H camp counselor, she was presented with important leadership opportunities. Anna’s experiences in 4-H convinced her that CAES was the right academic path for her.

Ryan grew up around the forestry profession. His father, Patrick (BSFR ’77), is a forestry graduate from UGA. Although following in his footsteps at Warnell, Ryan wanted an atypical forestry career. “I always knew I wanted to be at Warnell but didn’t want to do the traditional forestry role,” Ryan said. “I saw an opportunity on the business side, and Warnell has the premier forest business degree in the nation.”

Anna and Ryan both transferred into UGA and were inducted into AGHON – an honors society that recognizes students who demonstrate outstanding leadership, character and a passion for agriculture, forestry and natural resources, veterinary medicine, and engineering – the same semester. The two became friends through AGHON and began dating the following semester. They married in 2013.

In addition to giving back to UGA, the Reddishes remain actively involved within UGA’s large alumni network. Ryan served as a student ambassador for Warnell and recently concluded his term with Warnell’s Young Alumni Council. Anna is a member of UGA’s Metro-Atlanta Young Alumni Council, and commits to connecting and engaging young alumni in the Atlanta area.

“I really enjoy helping strengthen the Bulldog network,” Anna said. “I went to Auburn for vet school, so it’s been nice to reconnect with UGA alumni.”

“We enjoy being involved with students and helping them find their path. Watching them and their successes in school is so fun. We love getting to share those experiences with them.”