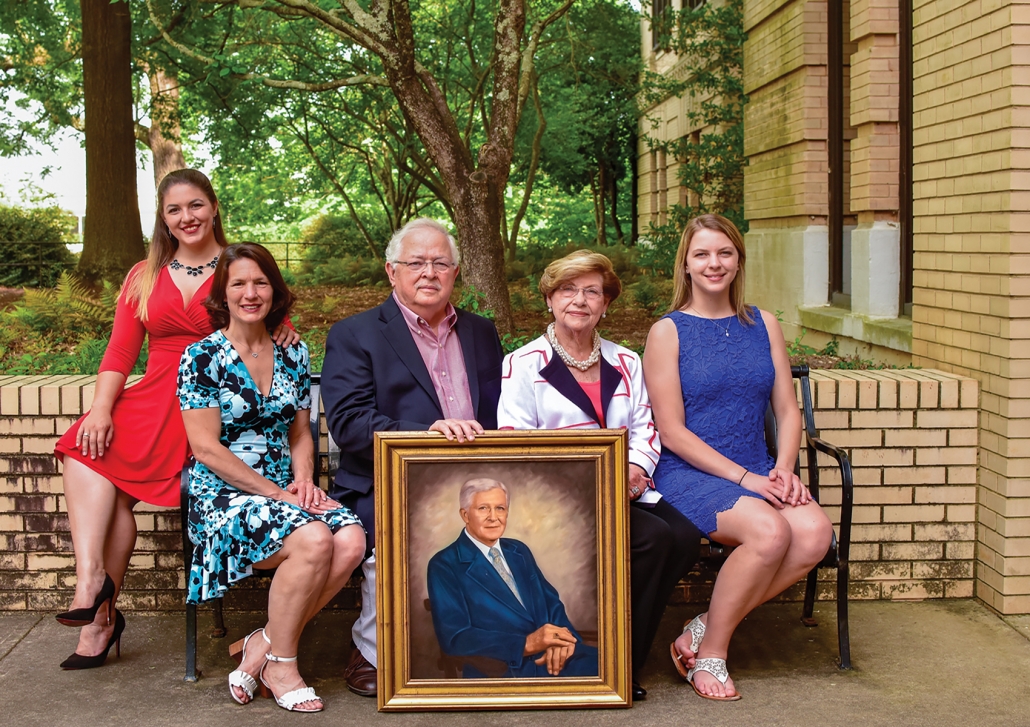 This story was originally written for UGAToday by Sara Freeland and Sharon Dowdy on June 12, 2018

To honor his legacy in agricultural education, Dr. Michael and Elaine Pulliam and family have gifted $1 million to create the H.M. (Morris) Pulliam Chair Fund in the University of Georgia College of Agricultural and Environmental Sciences.

This endowed chair position will be awarded to a tenured professor or a tenure-track faculty member. The Pulliam Chair faculty member must have an outstanding record in externally funded research and/or scholarly publications and be engaged in teaching, research and public service.

“A chair was being created for the surgeon, Andrew Warshaw (at the Institute for Pancreatic Cancer Research), and we helped with that for several years. Once that seed was planted in our minds, we decided to do something that would memorialize my father’s life,” Dr.Pulliam said.

A lifelong resident of Newton County, Morris Pulliam loved his family, his community and his students. He became a teacher during the Great Depression to provide a better way of life for rural youth.

“In the post-Civil War period, Georgia was a terrible place to be a grade schooler,” said Pulliam of his father’s childhood. “He was the son of an illiterate, hard-working farmer. His mother and father both died when he was young, and he was raised by his siblings.”

The elder Pulliam didn’t let his difficult upbringing hold him back. He enrolled at UGA, taught school while he attended college and, at 29, earned a bachelor’s degree from the UGA College of Agriculture.

“My father was a dedicated schoolteacher who gave everything he had to his family and to others,” said Pulliam, who is an established ophthalmologist in Covington.

Morris Pulliam’s contributions to the Covington and Newton County community also include the vocational building and canning plant, which was chosen as a pilot demonstration project for the state’s vocational agriculture program.

He retired in 1968 after 45 years of teaching but continued to be involved in the local school system as a member of the Newton County Board of Education. In 1975, a year before his death, Morris Pulliam was named Newton County Educator of the Year. He was also inducted into the Georgia Agricultural Education Hall of Fame by the Georgia FFA Alumni Association.

He also taught Sunday School at Red Oak United Methodist Church in Covington for 34 years. The adult Sunday school class is named in his honor.

Twenty years after his death, the Georgia FFA camp dedicated the Smith-Pulliam Cabin, named in his and J.D. Smith’s honor. In 2002, Michael and Elaine Pulliam funded the Nina and Morris Pulliam Cottage in honor of his parents.

The Pulliam family has strong ties to UGA. Michael Pulliam earned a bachelor’s degree in zoology from the university in 1961.

“I started out as a College of Agriculture student and I spent my first year on South Campus and took several classes in Conner Hall,” Dr. Pulliam said. “I met the dean of men, Dean Tate, when someone threw a firecracker out of my dorm-room window in Reed Hall. He wanted to talk about my father and not the firecracker.”

Two of the Pulliams’ grandchildren are currently enrolled at the university, and one is a recent graduate. Anna Kate Pulliam received her bachelor’s degree from UGA in math education in spring 2018. Elaine Murphy Pulliam is a junior majoring in music education with a minor in math and Grace Julianne Pulliam is a freshman majoring in genetics and music. The Pulliams’ daughter-in-law, Amy Andorfer Pulliam, is working toward a master’s degree in education with an anticipated graduation date of 2019.

Seven members of the Pulliam family are alumni or current members of the Redcoat Marching Band. And, the four youngest Pulliam grandchildren all plan to attend UGA, too.

Michael Pulliam said his father was a meek man who would not have wanted the recognition of the endowment. “But I recall what my mother once told me,” Dr. Pulliam said. “The only thing we can carry with us when we leave this world is what we have given to others.”

CAES Dean and Director Sam Pardue said the Pulliam endowment positions the college for success and allows the college to attract a new generation of outstanding teachers and researchers.

“Our donors’ investment in the future of the college and its programs is a point of encouragement for our faculty, staff and students,” Pardue said.

Establishing a professorship at UGA allows the university to recruit and retain world-class faculty who will educate tomorrow’s leaders while also helping solve some of society’s greatest challenges. Email Kathy Bangle if you are interested in learning more about this opportunity to leave your family’s legacy at UGA.

?>
The Parents Leadership Council continues to leave its mark on UGA’s campu...