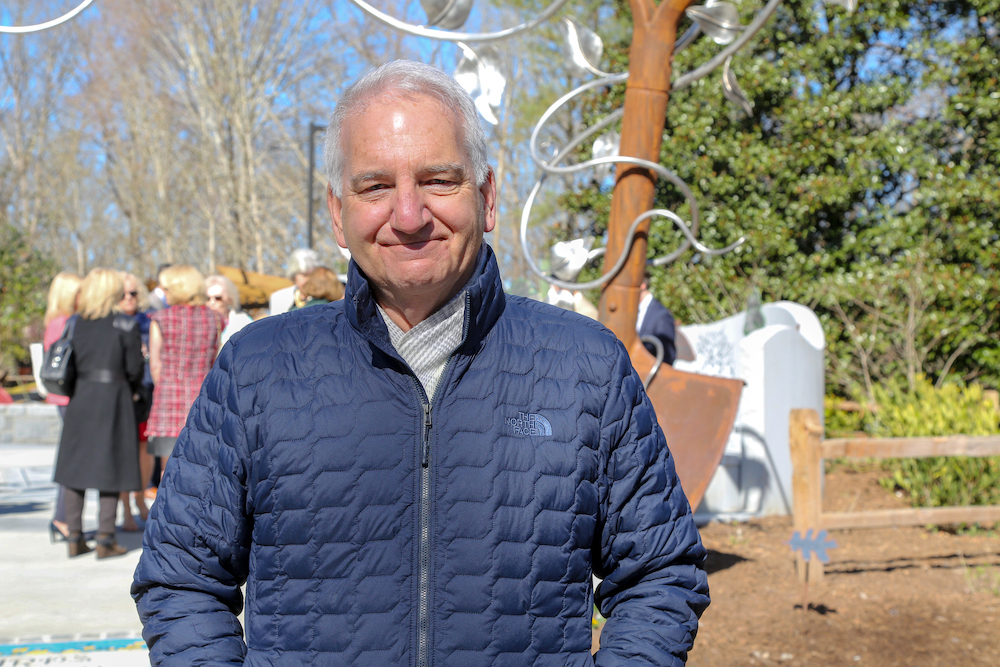 The professorship in the UGA College of Agricultural and Environmental Sciences was created through a generous gift from Distinguished Research Professor Emeritus Larry Beuchat. The research-focused position will be located in the Department of Horticulture and housed at the State Botanical Garden of Georgia at the University of Georgia in Athens, Georgia. The goal of the position is to promote ornamental plant research and the partnership between the Department of Horticulture and the State Botanical Garden of Georgia, a 313-acre “living laboratory.”

Some of UGA’s top revenue-generating new plant varieties, including more than 20 commercial and home garden blueberries and half of the hydrangea grown in the U.S., are the result of research from UGA’s horticulture department. 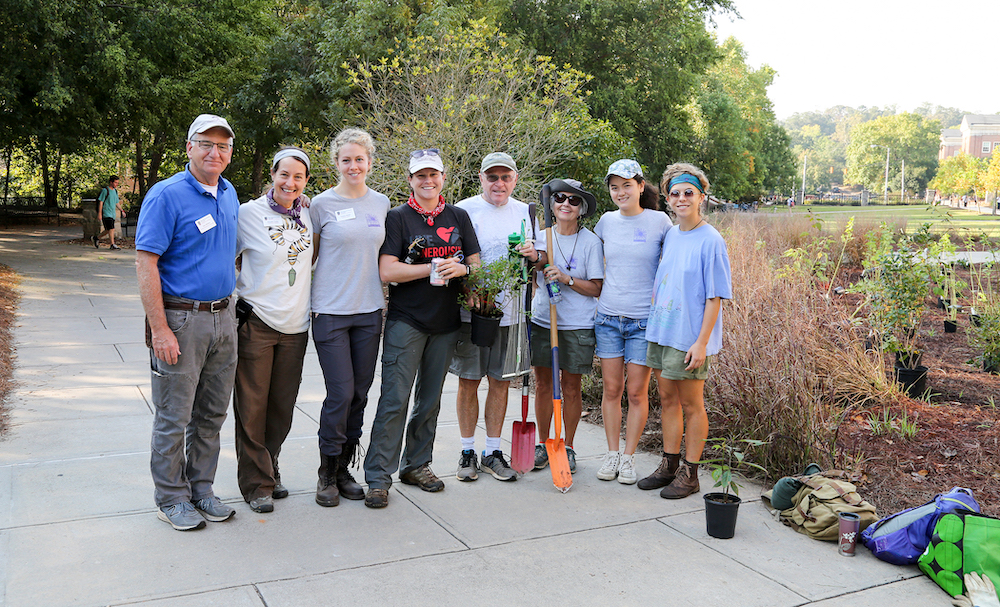 The garden was planted by bot garden staff, UGA students and volunteers. It will help educate students and visitors about the importance of native plants in an urban environment.

“I wanted to express my gratitude to the university for having been afforded the opportunity to be a faculty member and contribute to the advancement of food and agricultural sciences,” said Beuchat, who joined the Department of Food Science and Technology on the UGA Griffin campus in 1972. He has since published some 530 refereed scientific journal articles and five books, with most of his research at the UGA Center for Food Safety focusing on how food safety issues relate to foods of plant origin. “I wanted to support and fund programs that would advance ornamental plant science while simultaneously assisting students in the program.”

Beuchat developed an interest in plants at an early age when he helped his parents tend their gardens on the family’s dairy farm and sell the flowers, fruits and vegetables at a local farmers market. He earned a bachelor’s degree in horticulture from Pennsylvania State University.

Affolter joined the CAES faculty in 1993 and was promoted to full professor in 2005. As director of research at the State Botanical Garden of Georgia, he manages three full-time employees who have a combined total of more than 50 years of experience in the garden’s research and conservation program. The garden’s plant conservation program is recognized as one of the best in the country and has received awards from the American Public Gardens Association and the Association of Fish and Wildlife Agencies, among others.

“One of the goals of this endowment is to strengthen ties between the State Botanical Garden and the UGA Department of Horticulture. This mission is near to my heart since I have served as the director of science and conservation at the botanical garden for more than 25 years, and the most satisfying part of my job has been fostering an interest in plants in undergraduate and graduate students,” he said. 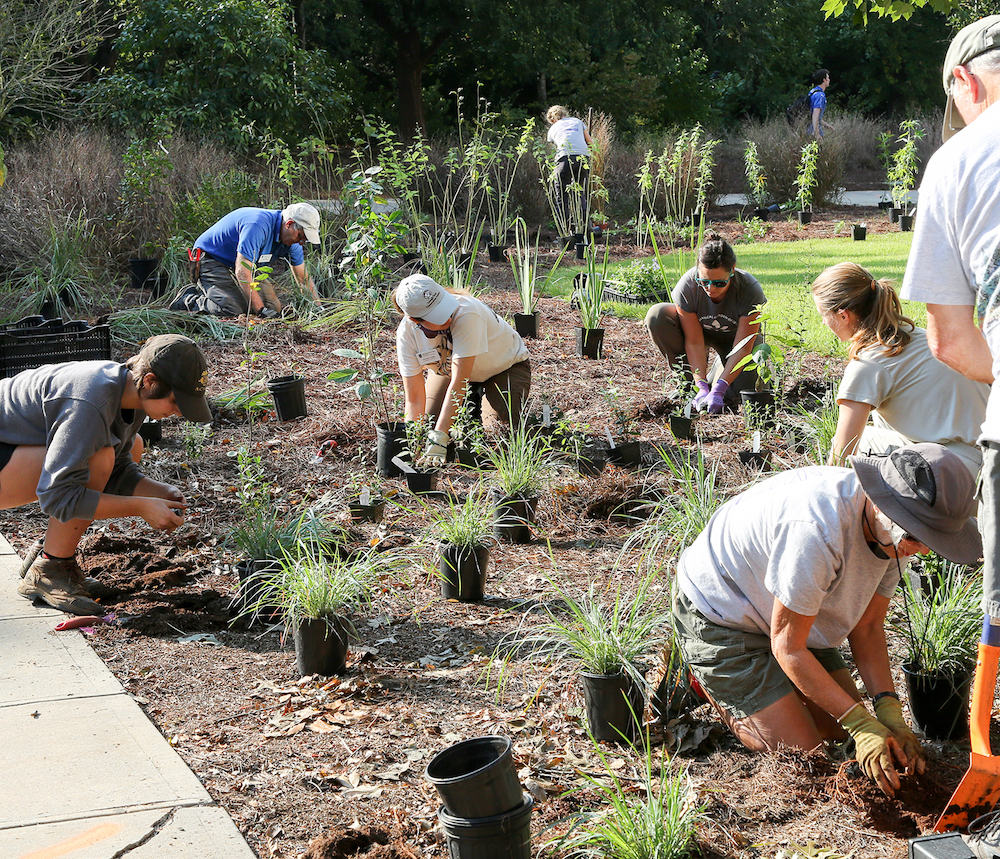 The garden was planted by bot garden staff, UGA students and volunteers. It will help eduated students and visitors about the importance of native plants in an urban environment.

Affolter leads the applied research program at the garden, which focuses on native plant production, habitat restoration and protecting endangered species. The Beuchat endowment will fund UGA student participation in the research and outreach programs at the State Botanical Garden of Georgia’s Mimsie Lanier Center for Native Plant Studies. This includes the introduction of new and underused species to home landscapes and commercial nurseries, he said. The gift also will fund research comparing the ecological value of various native plant selections used to promote biodiversity and for habitat restoration projects.

“The center is key to the growth of our plant introduction programs at the botanical garden,” Affolter said. “The renovated complex consists of a greenhouse, headhouse, high tunnel, raised beds and classroom, all essential for the success of our research program.”

UGA CAES graduate and undergraduate students receive hands-on training and conduct research in the center. Funding from the Beuchat professorship will be used in part to help support their research, which often focuses on the potential value of native ornamental species in home gardens, pollinator gardens and habitat restorations.

“The funding the professorship provides will accelerate our research efforts and create new academic opportunities for UGA students who have a passion for horticulture and botanical gardens,” Affolter said. “I look forward to strengthening the research program even further with the resources and recognition that accompany this professorship.”

Affolter has worked in university botanical gardens since receiving his doctoral degree in botany from the University of Michigan in 1983. He served as curator of the University of California Botanical Garden at Berkeley from 1983 until 1990, then as director of Cornell Plantations — the botanical garden, arboretum and natural areas of Cornell University — from 1990 until 1992. He is the founding chair of the Georgia Plant Conservation Alliance, headquartered at UGA, a network of more than 40 botanical gardens, government agencies, and environmental organizations working throughout the state to study and preserve Georgia’s endangered flora. He is a board member and past president of Botanic Gardens Conservation International U.S., part of a worldwide network of more than 700 institutional members, mostly botanic gardens, from 118 countries. The U.S. branch works with more than 100 member gardens and conservation organizations to raise awareness and scientific understanding of native and threatened plants in North America.

A common thread throughout Affolter’s career has been his interest in using university botanical gardens as platforms to create interest and knowledge of species that are new to the green industry. The recognition and resources associated with the Larry R. Beuchat Professorship will enhance these efforts and meet the goals of the endowment, he said.