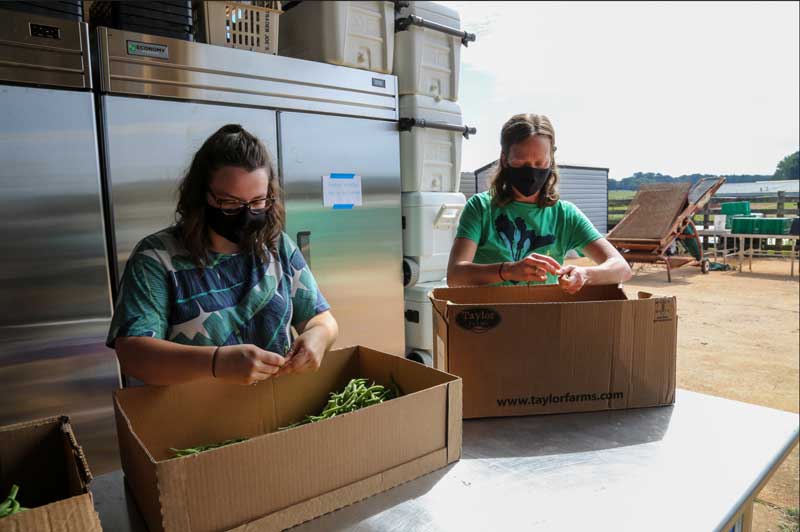 When the pandemic hit in March, leaders of Campus Kitchen at UGA knew their food recovery and redistribution services needed to expand. This student-powered program has grown each year since it launched in 2014, providing meals primarily to older adults in the Athens area, many of whom are raising their grandchildren. Program leaders knew their client base would expand, increasing their need for resources.

“We work with a lot of people who are in those vulnerable categories and who especially needed to be sheltering in place,” said Shannon Brooks, director of the Office of Service-Learning (OSL), the UGA Public Service and Outreach unit which houses Campus Kitchen. “We needed to be prepared to be with our clients and be supportive for the long haul.”

Another challenge was the lack of student volunteers, who normally keep Campus Kitchen staffed. OSL launched a campaign using GeorgiaFunder to cover operating costs through early summer, with an initial goal of $12,500. The campaign launched on April 21, and by April 23 that goal was met by generous members of the UGA and Athens communities.

After the initial short-term goal was exceeded at the end of April, OSL raised the goal to $37,500 to help the program continue operations without students into September and purchase freezers which enabled them to serve 30% more clients. More than 375 individual donors responded with gifts totaling $42,000 by the end of June. “We were just overwhelmed with the generosity of the UGA community as well as the local community,” said Brooks. “It made me very proud to be a part of the university’s community. Being able to expand our operations will allow us to support more people in the community and partner with more organizations for food recovery and distribution.”

Since March, Campus Kitchen has provided weekly meals and groceries to 200 home delivery clients, a total of 4,000 prepared meals and packages of food. Ten staff and volunteers have run the program since the students left campus in mid-March and have delivered approximately 7,400 pounds of food to community food distribution efforts such as the Athens Community Council on Aging, Dignidad Inmigrante en Athens, Covenant Presbyterian Church, Clarke County School District, Live Forward Athens and the Athens Area Homeless Shelter.