As part of the UGA Entrepreneurship Program, he is working to start a nonprofit that will help families facing unexpected financial hardships due to illness.

Nick and Tyler will be the first in their immediate family to earn a college degree.

“It’s great to know that someone has blessed me, and I hope I can bless someone else in the future by giving back.”

For Nick Murray ’19, forming the Power G with his new classmates in Sanford Stadium during his first week on campus was an “experience of a lifetime.” Nick would not be at the University of Georgia, however, if it weren’t for his scholarships. Not only did they make his “dream school” possible, but they also have allowed him to fully engage in UGA’s energizing community.

Nick and his twin brother, Tyler, who also attends UGA, were raised by their mother in Marietta, Georgia. When they were 17 years old, their mother passed away from breast cancer. The two brothers were left to take on many household and financial responsibilities atypical of high school students. The prospect of paying for college was daunting.

Nick’s scholarships came as a huge relief. He is the recipient of the Parents Leadership Council Need-Based Scholarship, awarded by a group of UGA parents who support several causes through their annual donations.

“I am thankful for the scholarship that the Parents Leadership Council (PLC) has given me,” said Nick. “It’s allowed me to come to this great university and focus on my degree. I feel blessed that the PLC is there to financially support me.”

“We get to meet with the Annexstads each year,” said Nick. “They are the coolest people. Their decision to give what they have to students makes me want to do the same immediately.”

Nick and Tyler feel strongly about helping future Bulldogs afford their education. Through the Office of Student Financial Aid, they created a mentorship program to assist prospective and new students facing financial burdens. The program also matches students with similar interests and majors to form a social support system.

“A lot of kids out there are in tough situations, but they are really resilient and continue to work toward higher education,” said Nick. “People don’t know that they need help because the students don’t admit it. I want to help as many of those kids as possible.”

"My scholarships prepared me to work hard for everything. They allowed me to take every opportunity to achieve what I want - to not settle for mediocrity, to go that extra step." 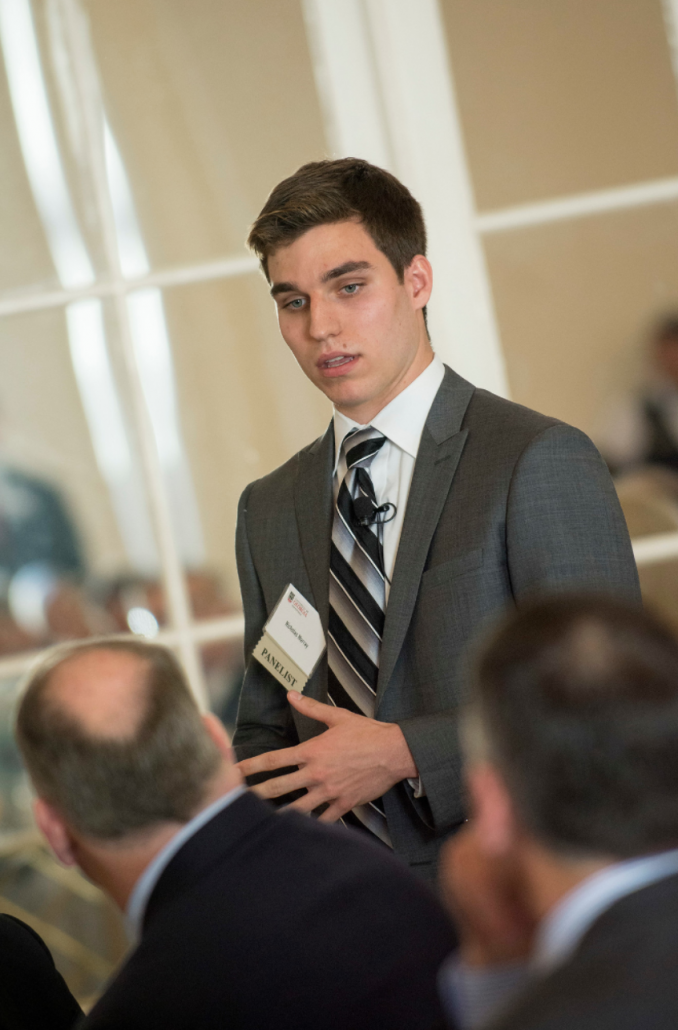 Nick had the opportunity to share his story and more about the impact of scholarship support with the Board of Visitors, a group of influential government, business and community leaders who serve as advocates on UGA’s behalf.

A Start-Up for Families in Need

A finance major in the Terry College of Business, Nick is preparing himself for a successful career. He is a member of the student-led UGA Finance Society, which arranges meet-and-greets with businesses in Athens and Atlanta. Nick has gained valuable connections through these networking events. In the summer of 2018, he will intern with leading consumer credit reporting agency Equifax.

Nick also is a part of the UGA Entrepreneurship Program. Through this coursework, he has received advice from local entrepreneurs and found a community of self-starting students. Nick is working on a start-up to help families, like his, who experience financial hardships due to illness.

“My dream is to create a nonprofit for people who are in my mom’s situation – a single mother who couldn’t find work after her diagnosis because she was classified as disabled. It would allow them to find work, set their own hours, and make money to support their families.”

Nick and his brother will be the first in their immediate family to earn a college degree. He predicts that one memory will surpass that first night forming the Power G in Sanford Stadium: walking under the Arch after graduation. That moment will represent the culmination of four years of hard work.

“My scholarships prepared me to work hard for everything – no matter what the task is. They allowed me to take every opportunity to achieve what I want – to not settle for mediocrity, to go that extra step,” said Nick.

Nick’s scholarship support is inspiring him to leave UGA a better place for those who come next.

“It’s great to know that someone has blessed me, and I hope I can bless someone else in the future by giving back.”