An aspiring teacher, Courtni Reese ’18 will make a daily impact on young lives with the help of her scholarship.

An early childhood education major, she wants to make an impact on young lives through teaching.

Growing up, many of Courtni’s peers did not plan to go to college.

By focusing on rural education, she hopes to encourage more students across Georgia to view college as an attainable goal.

“I would like to change lives. I want to be that one person that a child looks back on and remembers: ‘she believed in me.’”

At the University of Georgia, Courtni Reese ’18 has found her independence. Growing up, she never pictured herself leaving Bowdon, a small city of around 2,000 people in Western Georgia. Now, she can’t imagine what her life would be like if she hadn’t ventured to Athens to attend UGA. In the future, the early childhood education major hopes to encourage more students in rural areas to attend college.

“My life was changed when I was accepted into UGA,” Courtni said. “I really started seeing myself as a successful student and leader from that point on.”

Upon acceptance, Courtni was awarded the Gee and Susanna Kane Scholarship. Funded by Susanna and George Kane III, parents of two UGA graduates, this scholarship supports students who demonstrate a financial need in affording tuition. Not only has Courtni’s scholarship helped her financially, but it also gives her confidence in her abilities as a student and future teacher.

“I’m thankful that I had the opportunity to come here because I know UGA has changed the direction of my future,” Courtni said. “It feels good to know that someone believes in me and to reap the benefits after working really hard [in high school].”

“My life was changed when I was accepted into UGA. I really started seeing myself as a successful student and leader from that point on.”

A guiding light for young students

Courtni comes from a long line of teachers. Her grandparents, mother and aunt all taught at schools in her hometown. She came to college with a clear goal: to become a teacher, too. During her junior year, Courtni was accepted into the College of Education and immediately began student-teaching. She most enjoys working with students who “need a guiding light.”

“These kids are shaped by the small acts of kindness and compassion that fill their day-to-day lives,” Courtni said. “As a student-teacher, you have the power to control those little things. You can teach them that they are smart, beautiful and kind. On that day, you may be the only person that tells them that. I think that opportunity is really just priceless.”

A well-rounded start to her career

Now, Courtni has taught at four schools in Athens-Clarke and Barrow counties. Each school has students from a range of cultural and socioeconomic backgrounds. Her education has been enriched by exposure to their diverse experiences.

“Athens is a special place to do your student-teaching and go into the education field,” Courtni said. “It’s a great place to make a difference. I feel like I am part of a community that goes beyond the university.”

Courtni plans to pursue a graduate degree in guidance and counseling. Her current scholarship will help her financially plan for furthering her education after graduation in 2018.

Returning to her roots

While at UGA, Courtni has become increasingly interested in rural education. She understands how much her college experience has shaped her future, and she wants others to recognize that value. Growing up, many of her peers didn’t view college as an attainable goal. She wants to ensure that students in places like her hometown realize that “college is an option and they should go.”

“I would like to change lives,” Courtni said. “I want to be that one person that a child looks back on and remembers: ‘she believed in me.’”

And with the Kanes’ generous support, Courtni is well on her way to doing just that: changing the lives of young people by simply believing in them. 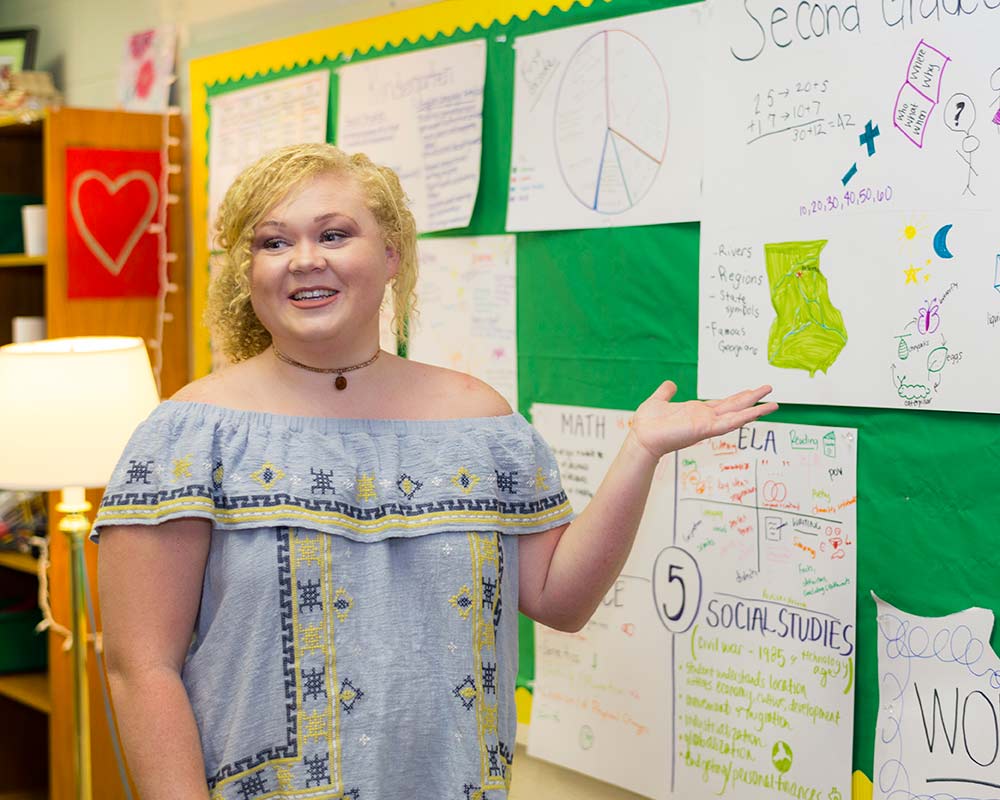 Courtni has gained firsthand experience as a student-teacher at four different schools in Athens-Clarke and Barrow county. She has enjoyed being “part of a community that goes beyond the university.”

Gaby Reyes gives a voice to those in underrepresented communities