Appreciation for all she gained from her UGA education fueled Betsy Camp’s desire to give back. Her knowledge of tax scenarios helped her recognize that planned giving was the most advantageous way to donate and provide a long-term benefit to the university. 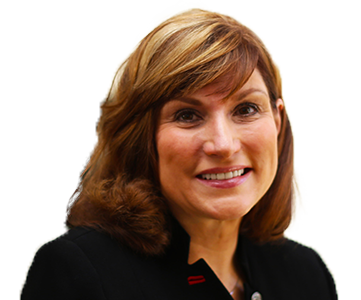 If ever there was an individual who is a testament to the power of planned giving, Betsy Camp is it. Her generosity will continue to assist in filling critical university needs far beyond today.

We are sincerely grateful for the example she has set for donors considering a gift as part of their estate planning process.

“UGA, and the Terry College of Business in particular, gave me tools and encouragement to pursue professional and life goals that I would not have dreamed possible.”

It has been said by historians that air conditioning transformed the Deep South and helped make it a national hub for business and industry. In the case of Rome, Georgia native Betsy Camp, (BBA ’74, JD ’77) air conditioning played a key role in her life’s journey that led to success in business and a philanthropic spirit that will benefit the University of Georgia, its students and faculty for generations.

Betsy flashes a wry smile when she recounts how, after graduation from an all-female prep school, air conditioning influenced an important decision in her life.

“I was in a standoff with my mother, an Agnes Scott graduate, who wanted me to pursue what, in her mind, was a more ladylike education by attending a women’s college. However, I had a different idea and was not going to do single-sex education any longer. I told her I just wasn’t going to college if I had to be in an all-girls setting again,” she said.

“With urging from the headmaster at my high school, my parents agreed that I could go to the University of Georgia and my mom insisted that I join Chi Omega – her sorority at Agnes Scott.

“As an inducement to go to UGA and join Chi Omega, my mom agreed to put an air conditioner in my car.”

Good thinking. It was an offer Betsy didn’t refuse … and it couldn’t have proven to be a better choice.

More than just making for cooler, more comfortable, driving during the sweltering heat and humidity we all know so well in Georgia, that air conditioner could be considered, indirectly at least, an adjunct to her success.

“My life evolved in a different direction than I thought it would,” Betsy said. “UGA, and the Terry College of Business in particular, gave me tools and encouragement to pursue professional and life goals that I would not have dreamed possible.

“I made great friends in Chi Omega … many are colleagues to whom I am still close personally and professionally today.

“The educational and social skills I learned at UGA were instrumental in my ability to achieve career success. Without my UGA education, I would not have had access to so many resources and been afforded so many great opportunities,” she continued. “I really appreciate all that the University of Georgia did for me and feel it is only right to give back so students today can have similar opportunities.

“Thanks to my UGA education, I became an accountant, then a lawyer, which gave me a combination of professional skills that I could utilize to help a struggling group of convenience stores that my family owned and operated.”

Betsy was instrumental in helping turn the business into a highly profitable enterprise, which was eventually sold years later at a significant premium to a larger corporate entity.

Even before the financial windfall that came from that sale, she was a generous supporter of the university for more than two decades, with gifts of service and funding with an emphasis on initiatives to help young women in the Terry College.

Once the family business had been sold, she was in a position to consider more substantial giving which led to a generous bequest in Betsy’s will that will provide long-term, lasting benefit to the Terry College of Business and, consequently, the institution as a whole.

“I feel like, with planned giving, I can make a larger gift that will help more people than I could ever do on my own right now,”
she said. “I think the UGA Foundation is very well organized, and when you read their annual report, you realize there is not much spent on administration. To me, that is critically important.

“They manage funds in a way that doesn’t wind up paying for a bureaucracy, but is instead being used where the needs are greatest; for students, teachers and facilities. Not all institutions are that way, and so I’m pleased with the stewardship of my gifts and those of other donors.

“I’d like to see more planned giving to UGA because it really is the easiest and most powerful way to offer a meaningful gift … and the most effective way for all concerned.

“If you examine how the Internal Revenue Service works – and I have been a ‘tax person’ throughout my career – planned giving is a wonderful way to make a large gift. It is one of the most advantageous giving methods for the donor – and the university – when you evaluate the different tax scenarios involved with philanthropy.”

“Leaders of the university in 20, 30, 50 years are going to know how best to use my gift … much better than I could ever know now,” she said.

If ever there was an individual who is a testament to the power of planned giving, Betsy Camp is it. Her generosity will continue to assist in filling critical university needs far beyond today.

We are sincerely grateful for the example she has set for donors considering a gift as part of their estate planning process.