What began as a desire to remain connected with their son, Jameson, has evolved into something grander for Alison Lewis and Rob Carnegie.

Now the Atlanta-based couple not only are active members of the University of Georgia’s Parents Leadership Council (PLC), but also proud supporters of the Georgia Commitment Scholarship Program (GCS) and active mentors for several students at the Terry College of Business.

They also are establishing a gift in Jameson’s name at the Terry College to benefit future generations of Bulldogs. Lewis and Carnegie want to help their son leave his own philanthropic legacy at the university that has meant so much to him and their family.

“This next generation is the future, and I think it’s our role to support that future to the greatest degree possible,” Lewis said. “I believe a strong way you can do that is through the education and experiences you get in college.”

Lewis and Carnegie have long felt it was important to be involved with the organizations and institutions educating their children, with the former recalling being intimately engaged with their children’s kindergarten and elementary school experiences. However, as their oldest son, Jameson, headed off to UGA to study business, they feared those opportunities for service and volunteerism would dwindle. 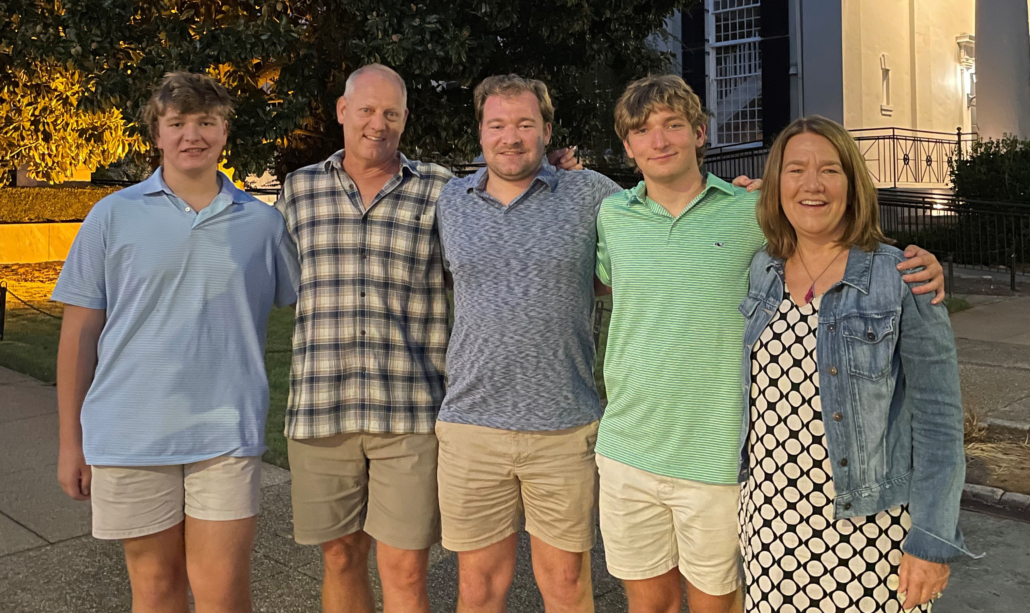 That’s what made the PLC so intriguing to them, enabling them to stay well connected to not only Jameson, but also the broader university community. The couple was first introduced to the organization during an event prior to Jameson’s freshman year at UGA, and that initial encounter alleviated several concerns.

“We had that weird feeling where we were going to be very cut off, so the thought was maybe (the PLC) can give us advice on how we can stay connected,” Lewis said. “That event was wonderful; hearing from other parents in terms of what the PLC does and how they not only make a difference in the lives of the students, but also how they create this bridge of connectivity to the school and other parents.”

That bridge also opened additional doors to Lewis and Carnegie, as they both have become more engaged in various mentorship and educational opportunities on campus. Lewis, who is the Chief Growth Officer at Kimberly-Clark, has participated in multiple informal meetings and group discussions with students at the Terry College of Business.

Interacting with students allows her to share her perspectives and experiences to provide some important career context and professional guidance. These small sessions typically include 10 to 12 students who gather over coffee and snacks to learn more about a career in marketing and business, assisting them in the search for internships and jobs.

“To me, giving back is both an investment of your time and your money,” Lewis said. “You can give one or the other or both. It’s been important for us to do both, and I think we’ve been very fortunate to be part of the Georgia Commitment Scholarship Program to help students in need.”

The scholarship program has played a significant role in easing the financial burden for many students. While initiatives like the HOPE Scholarship and Zell Miller Scholarship assist with tuition needs, the costs for room, dining and more often fall on the shoulders of families and students who might need some help to make those ends meet.

Donors to the Georgia Commitment Scholarship Program, like Lewis and Carnegie, have helped create more than 650 endowed need-based scholarships and connect students to a variety of resources on campus including mentorships, tutoring, academic coaching, and unique networking opportunities.

Lewis and Carnegie also have been able to meet their GCS student, a marketing major at the Terry College, who benefits from their gift. It’s allowed them to build a personal relationship with the student, offering counsel and support that can lay a foundation for future success.

Lewis said her family is blessed to be able to have Jameson attend UGA with many of his costs covered, creating new flexibility for them to give back.